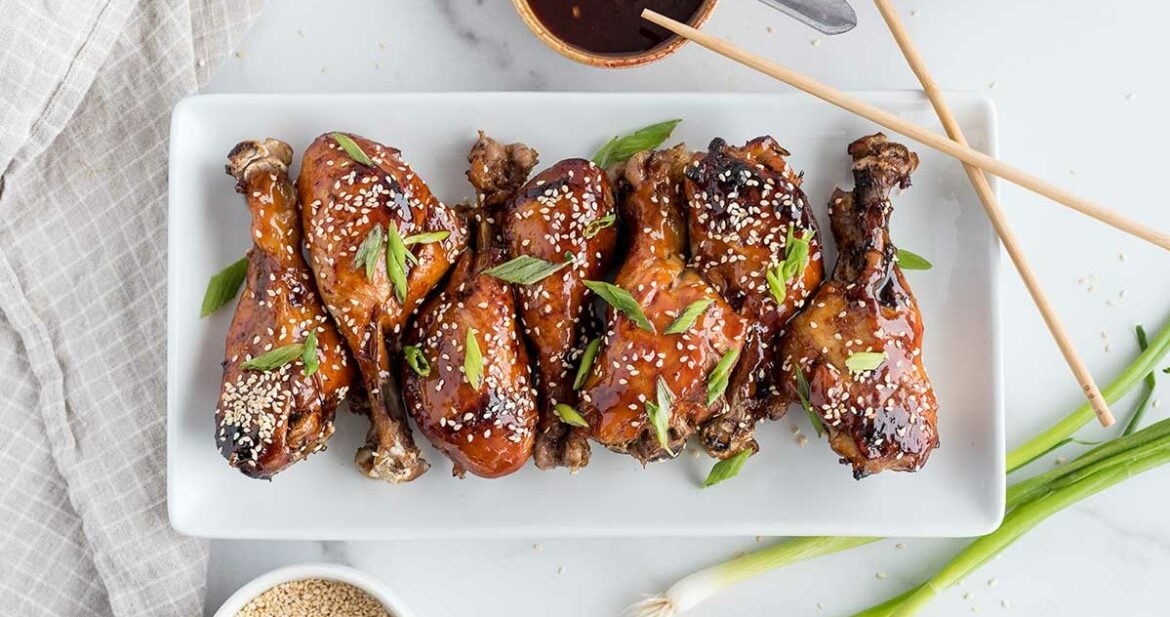 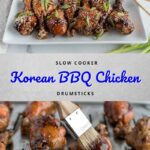 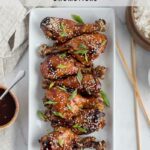 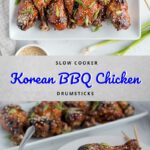 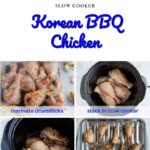 Korean cuisine is exploding in popularity around the country. Where I live, Korean restaurants are popping up everywhere! I’ve been experimenting with Korean recipes for years, partly because our youngest son was born in South Korea. This recipe for slow cooker Korean BBQ chicken has all the elements that make Korean cuisine so popular. It’s a little spicy and a little sweet, with plenty of bold flavor from garlic, soy, and sesame. Korean spicy chicken is slow cooked to tender perfection, then slathered with homemade Korean BBQ sauce.

Undercooked drumsticks can be tough and fatty. That’s why cooking them in the Crock-Pot is perfect. After a few hours in the slow cooker, drumsticks are well done and tender. Then they go under the broiler for a couple of minutes to crisp the skin and develop a nice char.

If you prefer chicken thighs, you can use those in this recipe. Either bone-in or boneless thighs will work.

A distinctively Korean ingredient used in this recipe is gochujang, a Korean spicy fermented chile paste. Gochujang is spicy, but its flavor is complex. It has a distinctive umami flavor from fermented rice and soybeans. It’s a little like miso meets Chinese chile paste.

With the popularity of Korean cuisine, Korean ingredients are getting easier to find. If you can’t find gochujang at a grocery store or Asian market, you can order it from Amazon, Thrive Market, and other online sources.

Make sure you get original gochujang chile paste, not gochujang hot sauce or some other product.

Gochujang chile paste is thick, like tomato paste. You use just a little bit in most recipes. Gochujang chile paste is very hot on its own, but it becomes only moderately hot mixed with the other ingredients in the recipe. If you’re sensitive to spicy foods, start with half the amount in the recipe. If you like a bit of spice, use the full amount. It’s a moderately spicy recipe.

Start your slow cooker Korean BBQ chicken by patting dry 8 chicken drumsticks with paper towels. If you want more drumsticks, you could use as many as 12. There will be plenty of marinade and sauce.

If you want to avoid using plastic bags for environmental reasons, marinate the chicken in a glass bowl with a tight fitting lid.

When it’s time to cook your Korean spicy chicken, remove the drumsticks from the marinade with tongs.

Usually by this time the skin on some of the drumsticks will be falling down or bunched up. Pull up the skin and stretch it over the meat. It’s like a sock that has fallen down and needs to be pulled back up.

Place the drumsticks, skin side up, in your Crock-Pot or slow cooker. Optionally, you can use a slow cooker liner to make cleanup easier.

Cook the drumsticks in the slow cooker on high for 3 hours, or on low for 6 hours.

The homemade Korean BBQ sauce is my favorite part of this recipe. It’s sweet, spicy, salty, and addictive! It’s also super easy to make. I love this sauce so much, I’m planning to experiment with ways to use it on other meats, especially pork.

Place all the ingredients for the Korean BBQ sauce in a small saucepan. I have a Cuisinart 1-quart stainless steel saucepan I use for sauce making. It’s one of my favorite pans. It cleans up beautifully in the dishwasher. I’ve had it for more than 10 years, and it looks brand new.

Whisk together the sauce ingredients and bring to a boil over medium heat. Simmer for 2-3 minutes. That’s it – you’ve made your own Korean BBQ sauce!

Brown chicken under the broiler

After slow cooking for 3-6 hours, your Korean BBQ chicken drumsticks will be tender, with the excess fat cooked away. The next step is to put the drumsticks under a broiler for a few minutes to crisp and brown the skin.

Preheat your broiler and position a rack near the top of the oven. Broil the drumsticks for 2-4 minutes, until they are just beginning to char.

Using a pastry brush, coat the chicken pieces with the sauce. This is when they really start to look appetizing!

Serve Korean BBQ chicken with Korean BBQ sauce on the side. I usually accompany this dish with cooked rice and a salad. Last time, I used an “Asian slaw” salad kit from the grocery store, and it was surprisingly good.

I hope you and your loved ones enjoy this recipe. If you make it, be sure to leave a review!

If you like this recipe, be sure to check out some of FoodLove’s easy chicken drumstick recipes: 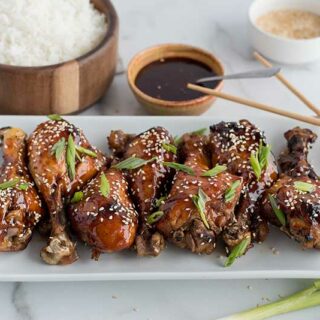 For the Korean BBQ sauce: