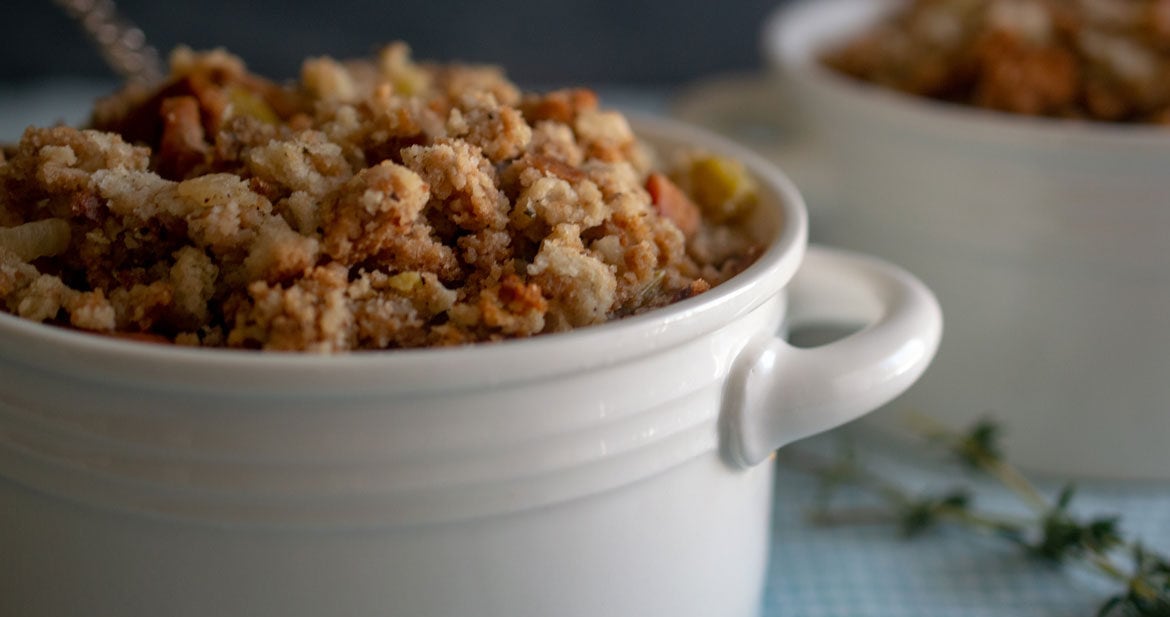 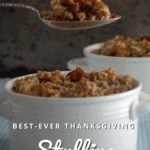 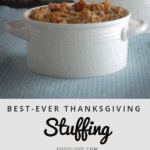 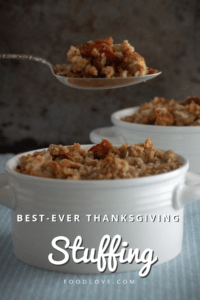 Dice one cup of onion and one cup of celery. Cut 1/2 pound of sliced bacon crosswise into little sticks about 1/3 inch wide.

Cook and stir the bacon in a large skillet over medium high heat until the pieces are starting to get crispy. Turn off the heat, and move the bacon to a small plate using a slotted spoon. Pour the bacon fat from the skillet into a heat-proof measuring cup.

Return four tablespoons of bacon fat to the skillet. Add the celery, onion and butter. Cook and stir over medium high heat for three minutes. Add the garlic. Cook and stir for three more minutes until the celery and onion are translucent and starting to soften. Remove from heat. 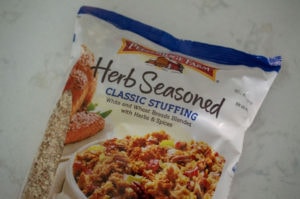 Blend all the stuffing ingredients together in a large mixing bowl. Taste to find out if the seasonings need to be adjusted. I like a lot of black pepper in stuffing, so I might add more than the recipe calls for.

The stuffing mix is already seasoned, but I like to add a little extra seasoning, using either dried sage or poultry seasoning. My absolute favorite is Rudy’s Turkey Rub, which I have shipped from Texas, but any poultry seasoning will work fine.

This stuffing is moist but not wet. If you like a wetter stuffing, add 1/2 cup to 1 cup more liquid (a mix of apple juice and broth). If you have homemade chicken or turkey broth, that is absolutely the best, but canned or reconstituted broth is also good. 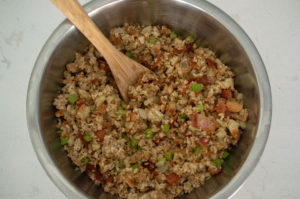 When it comes to Thanksgiving stuffing, people debate about whether to cook it inside or outside the turkey. If the stuffing is cooked outside the turkey, it’s technically not stuffing, it’s dressing. There’s no need to get hung up on terminology, though. It’s going to be tasty no matter what you call it!

I cook my stuffing outside the turkey, because in my experience a stuffed turkey takes longer and is harder to cook. It’s already challenging to roast a turkey and get both the light and dark meat to the right temperature. Stuffing makes it even more challenging. Our favorite way to cook a Thanksgiving turkey is using an electric turkey roaster. 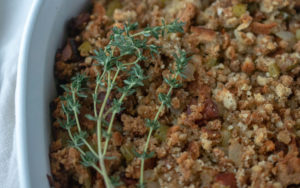 To cook your Thanksgiving stuffing outside the bird, put the stuffing mixture in a medium casserole dish, preferably one that has a lid. Bake, covered, at 350 degrees for 25 minutes. Uncover and bake another 10 minutes. By this time your stuffing will be cooked through and toasty on top.

Isn’t it gorgeous? This Thanksgiving stuffing is absolute perfection – savory and smoky, with a touch of sweetness. 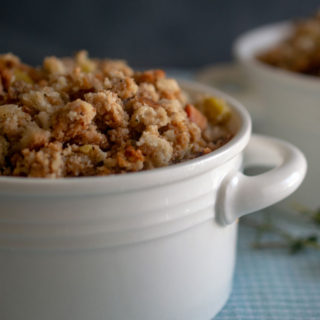