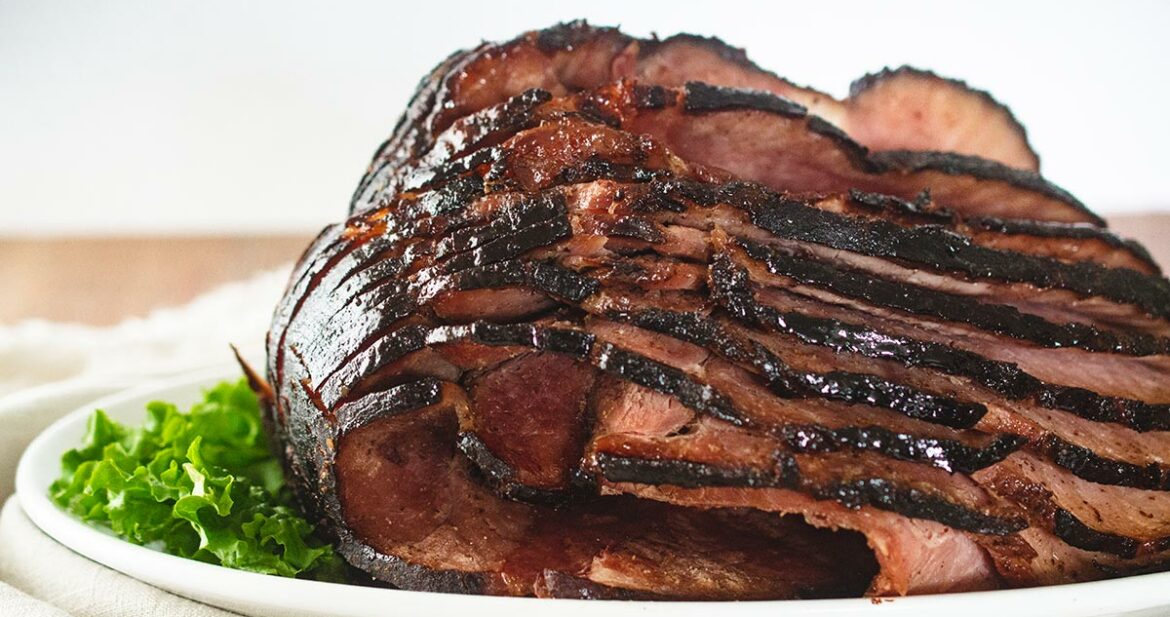 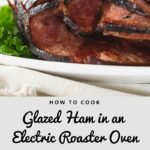 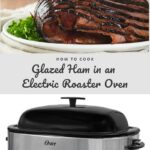 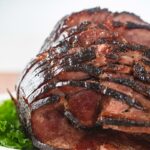 How to cook Maple Glazed Ham in an electric roaster oven for a sweet and sticky holiday dinner your guests will remember.

The irresistible smell of a ham roasting in the oven is sure to bring back happy holiday memories. Whether you’re making it for Easter, Christmas, or Sunday dinner, ham is one of the easiest and most popular special occasion meals.

Why Use An Electric Roaster Oven

An electric roaster is basically a smaller version of a regular oven, powered by electricity. I always think of it as a cross between a Crock-Pot and a toaster oven. The main reason to buy an electric roaster is to roast a Thanksgiving turkey, but it is useful any time you need extra oven space.

I love to use my electric roaster for holiday meals because it’s essentially an extra oven. By cooking this maple glazed ham in a roaster oven, I can reserve space in my regular oven for other holiday favorites, like potatoes, rolls, cakes, pies, or roasted vegetables.

You can use it for much more than holiday ham or turkey:

Which Electric Roaster is Best?

I recommend the 22-Quart Oster Roaster Oven with Self-Basting Lid, which can cook a turkey up to 26 lbs. This is an updated version of the roaster I own, and also slightly larger. I cannot imagine needing anything bigger than this.

I’ve owned my electric roaster for over five years, I use it a few times a year, and it still pretty much looks and works as if it’s brand new.

Some models come with removable serving dishes – something I really think is worth buying. They’re great for serving at parties, and even if your roaster doesn’t come with serving dishes, you can buy them separately.   Prices for electric roasters generally range from $30 to $130, depending on size and quality. I swear by my electric roaster, but there are a few pros and cons to consider:

How To Buy A Spiral Ham

Maple Glazed ham is one of the easiest and most impressive holiday dishes. At the grocery store, look for a high-quality ham that’s large enough to feed your crowd.

In fact, spiral hams are already fully cooked when you purchase them. So you’re not really cooking it, just heating it through. And in this case, adding a sweet homemade maple ham glaze. So after you’ve bought the ham, you’re halfway to the finish line.

Here are a few tips to keep in mind when buying your holiday ham:

How To Use a Probe-Style Food Thermometer

A probe-style food thermometer really helps when cooking a large piece of meat like maple glazed ham. I have a Lavatools Javelin PRO Duo Ambidextrous Backlit Professional Digital Cooking Thermometer, and it works perfectly. If you want the most accurate, top-of-the-line probe thermometer, I also recommend the ThermoWorks ChefAlarm, rated #1 by Cook’s Illustrated.

To use the thermometer, insert the probe into your roast, and set the alarm to go off when it reaches the desired temperature. You won’t have to lift the roaster lid or unwrap the ham to check the temperature, so the ham stays nice and juicy. How to know that your spiral ham is done? The thermometer should register 140 degrees F.

Preparing and Heating the Ham

The key when cooking maple glazed ham in an electric roaster is to heat the ham all the way through and keep it from drying it out. Here are some helpful tips:

How To Cook a Maple Glazed Ham

Here are the easy step-by-step instructions for my maple glazed ham recipe:

Preparing the maple syrup glaze for your ham requires only a few simple steps:

How To Glaze Spiral Ham

How To Serve Maple Glazed Ham

I love to present the impressive maple glazed ham on a platter. You can garnish the dish with lettuce, grapes, or sliced oranges for color. After removing the ham from roaster, there will be juices and glaze left behind in the foil.

Don’t let this maple syrupy gold go to waste! Pour the liquid over the ham for moisture, flavor and shine. I don’t recommend using all the liquid, because it might be too much sugar, salt, and water to your holiday feast.

Enjoy making a stunning maple glazed ham in an electric roaster oven! It’s a beautiful, classic holiday dish, and no one will know how easy it is!

Now that you have a simple honey ham recipe as your centerpiece, here are my favorite side dishes to serve alongside maple glazed ham in an electric roaster: 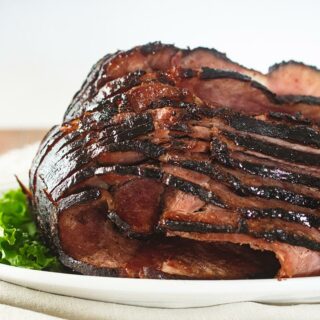 If your spiral ham comes with a glaze packet, you may add the glaze packet ingredients to your homemade glaze. Cooking times are approximate and will vary depending on the size of your ham. For best results, use a food thermometer.