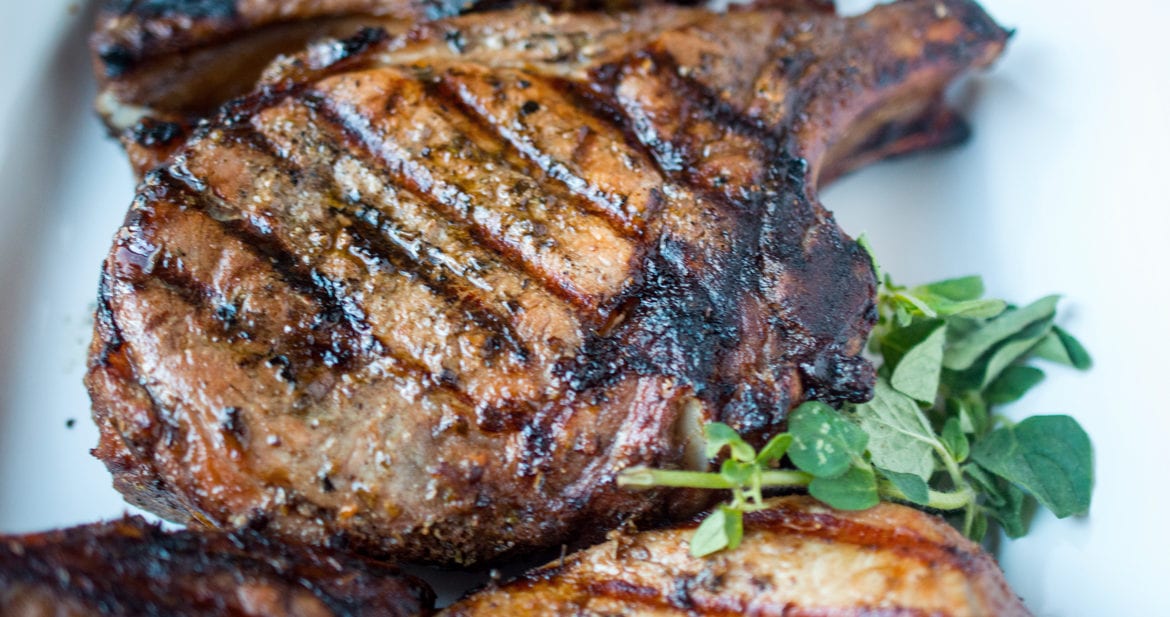 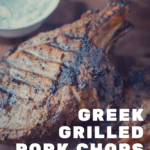 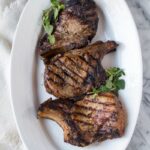 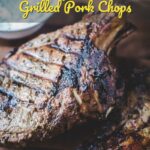 These Greek grilled pork chops are cooked over a two-zone fire so you can first caramelize the outside over high heat, then finish cooking over gentle heat so the interior stays juicy. The chops get get a blast of flavor from a classic Greek marinade of olive oil, lemon, garlic and oregano. The entire recipe requires only six ingredients, plus salt and pepper. This recipe is a summer staple at our house, perfect for Sunday dinners, special occasions, or any time. 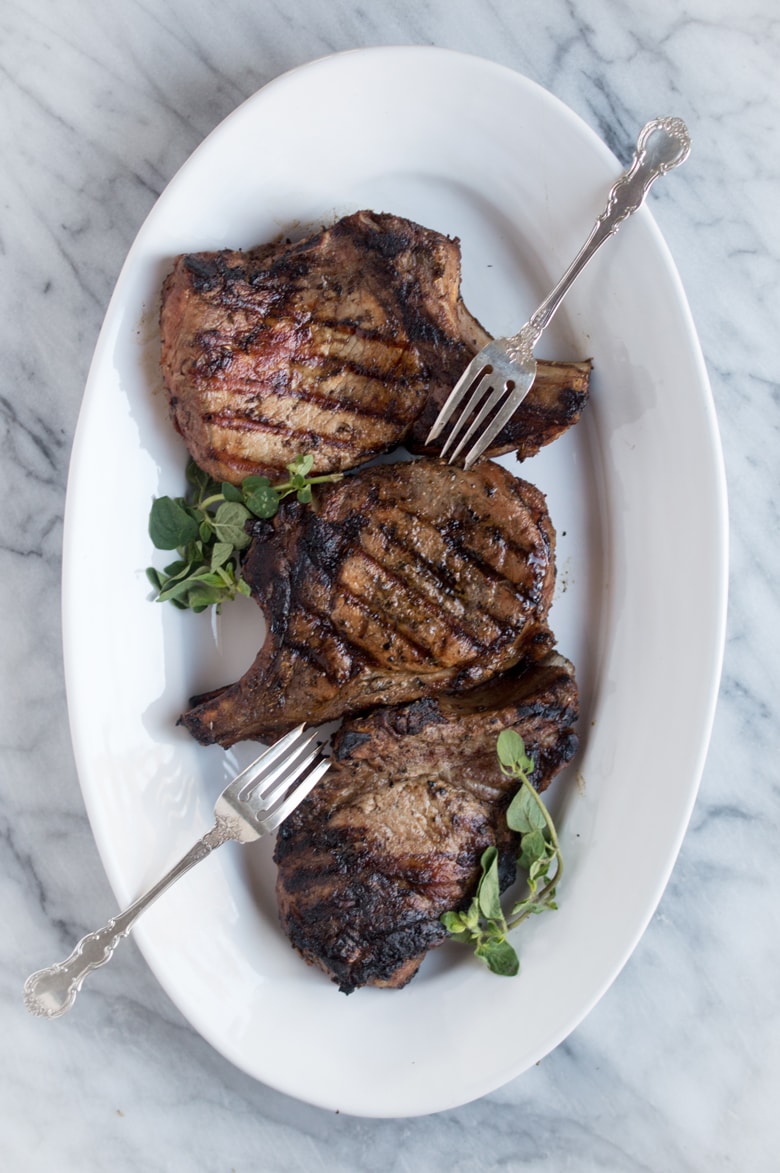 It’s important to select the right cut of pork for this recipe. You want thick (one-inch or 1 1/2 inch) bone-in pork chops. I like to use bone-in center cut loin chops, or bone-in center cut rib chops, which I can buy at my local Costco. At most supermarkets, you can ask for this cut from the butcher.

Keeping the bone in helps protect pork chops from overcooking, because the bone slows down the cooking process. The bone also adds a little more flavor.

Let your Greek pork chops marinate for anywhere from two hours to 24 hours. Overnight is best. I’ve marinated them for up to 48 hours, when something came up and I couldn’t grill them when I expected.

If you are marinating more than two hours, keep the pork chops in the refrigerator. Take them out of the fridge 1-2 hours before grilling so they can come to room temperature. Don’t try to grill cold meat! If a chop, steak or hamburger is cold when you put it on the grill, you will have a hard time bringing it up to the right temperature before the outside is burned.

Set up your two-zone fire by piling 90-100 charcoal briquets on one side of your grill. Yes, I do count the briquets, because I want to make sure I have a nice, hot fire that will last through the entire cooking process. I use a Weber Performer Premium charcoal grill

. If you have a gas grill, follow the instructions for a two-zone fire.

My grill has a gas starter, but if you don’t have one of those, I recommend using a chimney starter

to get your charcoal going. 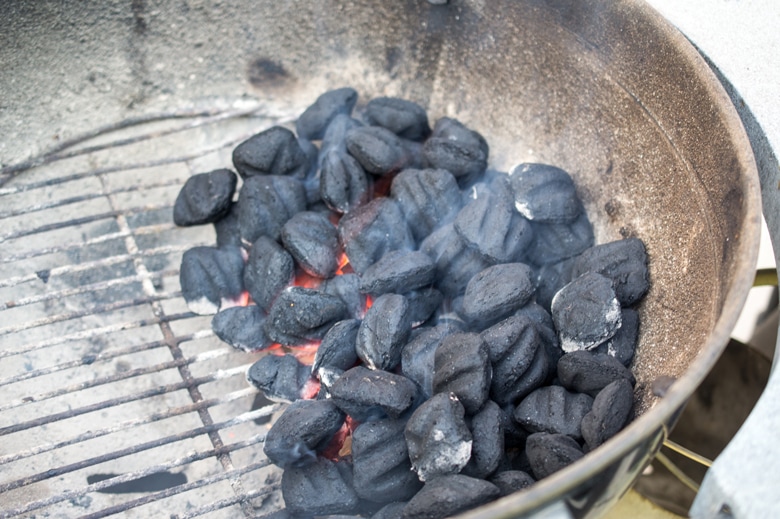 Your fire will be ready for grilling when all the briquets have mostly, but not completely, ashed over. This will probably take about 25 minutes after the fire is lit. 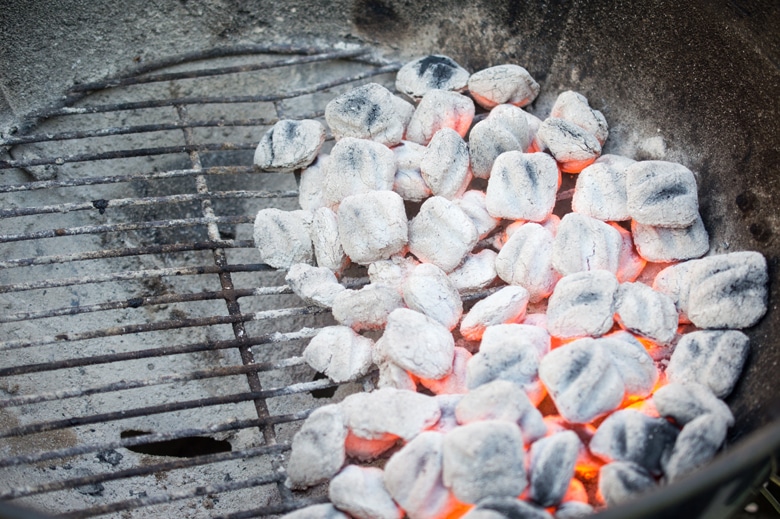 Once the fire is ready, replace the grill grate, and make sure it’s brushed clean. Wad up a paper towel and place it in a small bowl. Soak the paper towel with canola oil or another oil that tolerates high heat. Grab the oil-soaked paper towel with long-handled barbecue tongs, and use that to oil your grill.

Now you’re ready to sear your pork chops. Place the pork chops directly over the fire, and sear for 3 minutes on each side, or until they develop a little bit of char and some nice grill marks. Flip them over with tongs, a meat fork or a long-handled spatula. 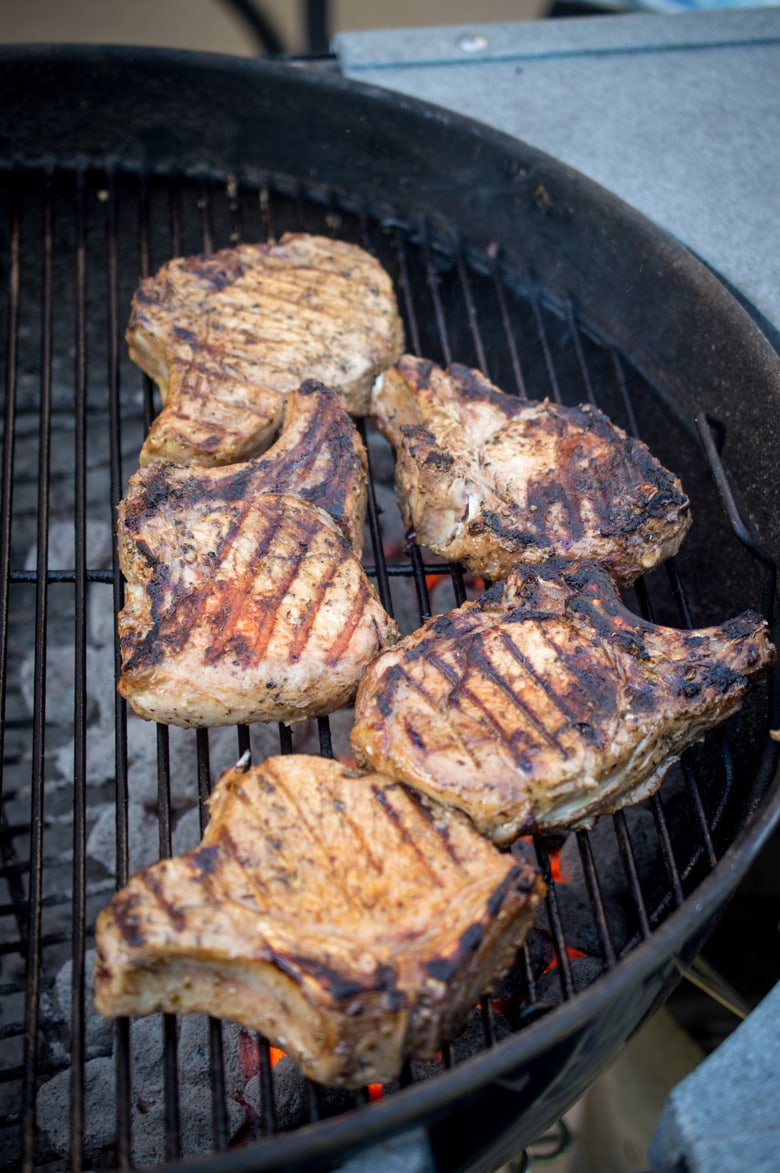 When I checked the temperature of my pork chops after searing, they were only 105 degrees Fahrenheit on the inside. Not anywhere near the 145 degree minimum safe temperature recommended for pork chops.

Now it’s time to move your chops over to the cooler side of the grill to finish cooking over indirect heat. Place the chops so the bone side is toward the fire. If you have some chops that are bigger than the others, place those closest to the coals.

Cover the grill with the lid, and let the chops cook over indirect heat. Check the temperature every five minutes or so until the chops have reached an interior temperature of 145 degrees. 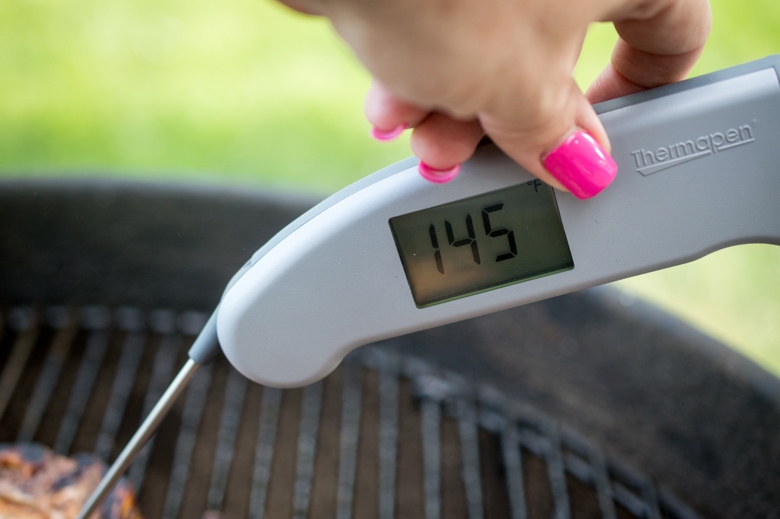 Use a meat thermometer to check the temperature of your chops. Stick the meat thermometer into the thickest part of the chop, but not too near the bone. Check in a few different places to make sure your chops have reached at least 145 degrees.

Recently I upgraded my food thermometer to the Thermapen Mk4, the fastest and most accurate pen-style food thermometer you can buy. It’s waterproof, has an automatic backlight for low light conditions, and has a rotating display so you can read it in any position. It instantly measures any temperature up to 572 degrees, so you can use it for other things besides meat, such as frying or candy making.

Once your Greek grilled pork chops have reached 145 degrees, put them on a plate or tray, cover with foil, and let them rest for about 10 minutes before serving. The resting process allows the juices in the meat to redistribute.

As a final step, top the pork chops with a sprinkle of salt and a squeeze of lemon juice, just before serving. 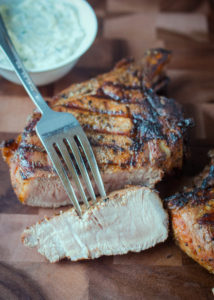 You can see these Greek grilled pork chops are cooked through, but still juicy. I like to serve Greek pork chops with authentic Greek tzatziki sauce, which I learned to make from a professional cook in Athens. I hope you love this recipe. It could easily become one of your family’s favorites! 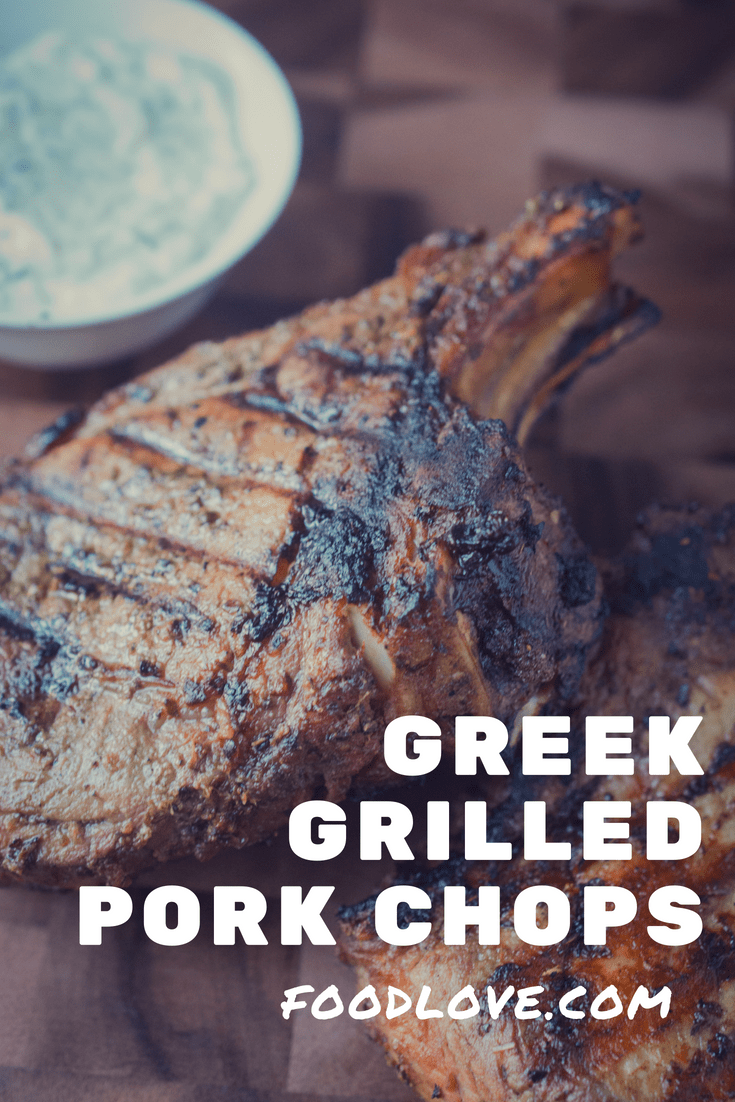 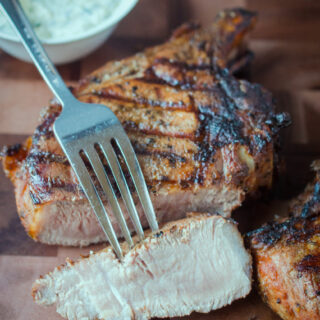 Requires 2-24 hours marinating time.
Disclosures: The author was not compensated by any person or company for the content of this post. The post may contain affiliate links. If you buy a product using these links, we receive a commission. This helps with the cost of publishing recipes on this website.
301
Shares
Previous Post: « Cast Iron Skillet Steak Bites with Sriracha Mayo
Next Post: Japanese Pork Katsu (Tonkatsu) »